In our blog today, we will explain the term trueness in the context of method validation, as well as its calculation, highlight its importance and provide some information about what is required.

Trueness of an analytical method measures the correctness of the method regarding the analysis of the analyte. It is the measure of difference between the obtained values against the expected, theoretically true values due to errors (this includes random and systemic errors). For example, imagine a situation where a footballer is practicing his spot kicks. If he scores every time irrespective of the side or corner of the goal (target range), he is said to be true ("accurate") as he always hits the goal. He is not precise as he doesn’t hit the same corner or side every time, but that’s another story already told in our last blog article. To put it simply, trueness is the ability of the method to determine the true value, i.e. to hit the goal 😉

The term trueness should not be mixed up with the term accuracy, although in the English regulations "accuracy" is more common compared to "trueness". A detailed explanation of the difference between these two terms can be found here. 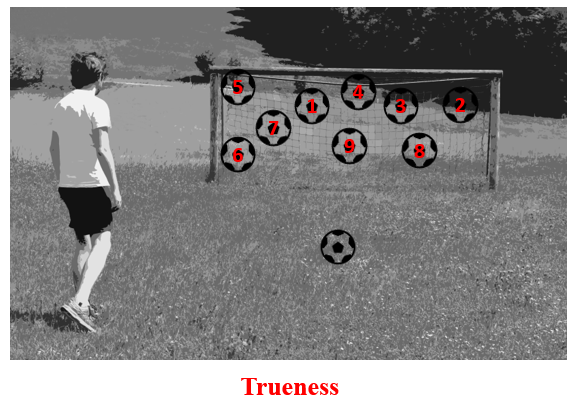 Trueness is an important parameter that needs to be determined as a part of the validation of analytical methods, such as quantitative determinations like impurity tests and assays. It’s a parameter telling us something about the correctness of the values obtained during measurement. For the evaluation of trueness, it must be differentiated in the following way:

To determine the trueness of a method for a drug substance (the active ingredient), the method could be applied to an analyte with known concentration such as the reference standard. Reference standards are particularly suitable for this purpose because they have been very well characterized and their declared concentration can therefore be assumed to be correct. Thus, they are considered "being beyond all doubt". The results from the method could also be compared to other, already established methods with known trueness.

The trueness of a method for the analysis of a drug product could be determined by adding a known amount of DS to be analyzed, into a mixture of synthetic components of the DP. Alternatively, in case of unavailability of the synthetic DP components, known amounts of analyte could be added to the DP and analyzed using the method. Like for DS, comparison with an independent procedure is also allowed.

For quantitative impurity tests, trueness can be determined by spiking the analyte with known amounts of available impurities (like in this example) or like for the assays by a comparison with an independent procedure.

As per the method validation guideline ICH Q2(R1), trueness should always be evaluated with a minimum of 9 determinations (e.g. 3 concentrations, 3 times). Trueness of an analytical method is calculated by %error or %recovery.

Recovery of an analytical method is valued by comparing the theoretical and the obtained value. This can be done by dividing the obtained amount of the spike during measurement through the theoretical amount and then multiplying with 100 to obtain percentage. E.g. we know that our impurity spike should have a theoretical concentration of 40 pg/cavity, but we just obtain a measured value of 38.8 pg/cavity. Thus, the recovery is 97% (38.8 / 40 * 100). In case linearity experiments are used to evaluate trueness as well, the obtained main peak area value can be divided through the theoretical one calculated by the regression line. Under ideal conditions, a recovery of 100% would be expected but this is almost never possible because of obvious differences in method, instrumentation and handling.

Two ways to infer trueness using the data of the linearity experiments (if no spiking is possible) are described in more detail in separate blog posts. Option 1 is via "normalization" while option 2 uses "recovery".