In our blog article today, we would like to take a short look on the analytical method validation parameter “precision” and explain the different terms repeatability, intermediate precision and reproducibility.

Precision, under any circumstances should not be mistaken with trueness. A method can be precise but not true ("accurate") or vice versa or both. Check the example below for a better understanding: 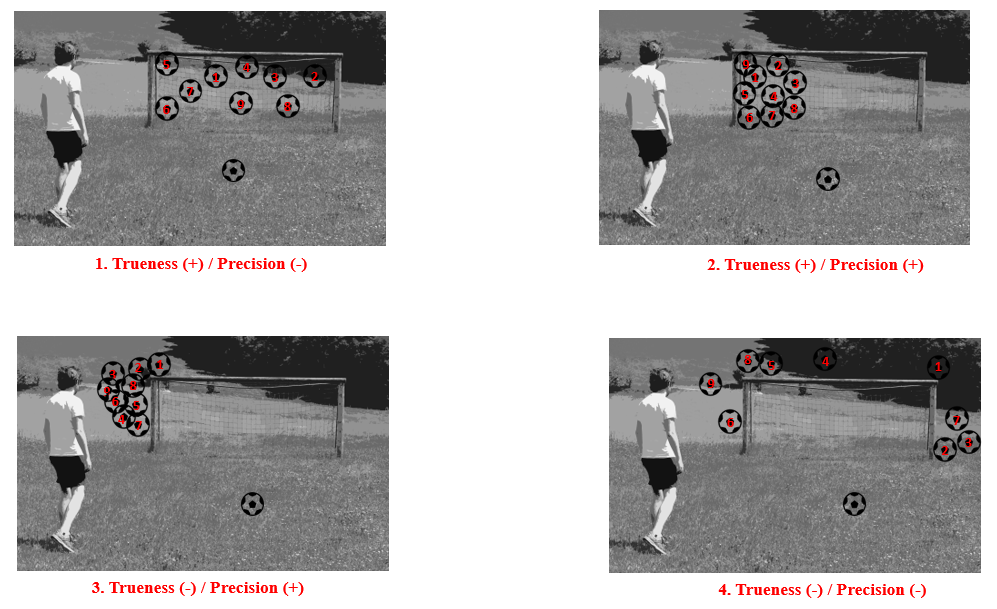 Precision of analytical methods is defined in terms of repeatability, intermediate precision and reproducibility.

Repeatability tells us about the closeness of the analytical results after a series of repeated experiments in a short time interval. Repeatability is also referred as intra-assay precision. In this, the method is usually performed multiple times within the same day by the same operator. As per the method validation guideline ICH Q2(R1), repeatability can only be determined with a minimum of 9 determinations (3 concentration x 3 replicates) or 6 determinations at 100% of the test concentration.

Figure 2: Depicts the idea of repeatability. Same footballer takes the spot kicks at different times on the same day.

Reproducibility is a kind of precision that displays differences in a method by comparing analytical results obtained by a method performed in different laboratories, thus different places. It should not be mixed up with method transfer, which is an important (mandatory) parameter for drugs and their active pharmaceutical ingredients that are being launched in different countries or continents or are being manufactured in a new place than the one reported before. The reproducibility essentially shows that the performance of the analytical method is independent to the location of the laboratory and to different laboratories, respectively.

Figure 6: Details the idea of reproducibility (inter-laboratory) precision. Same footballer takes the spot kicks in two different locations, although it is not necessary using the same footballer.

Reproducibility is not used only to measure the performance of a method. Many laboratories use this parameter to assess their performance of the quality test. A proficiency test like a universal Ring test could be performed for such purpose. A Ring test is an inter laboratory test that allows to estimate the performance of a method (and of the testing laboratory, respectively) based on trials done with similar homogenous samples. The goal of such test is to improve the quality and efficiency of the laboratory performance (e.g. in case of being an accredited testing laboratory). Ring tests are essential to prove competence to accreditation authorities, customers, and regulatory bodies. Often Ring tests are performed for methods which should become compendial methods, thus being listed in a pharmacopoeia like e.g. in the Ph.Eur..

Results from precision tests are analyzed statistically. The ICH Q2(R1) suggests the result should be presented in terms of standard deviation (SD), relative standard deviation (RSD, coefficient of variance), and confidence interval (CI) for each type of precision. The CI is a useful statistical tool to assess precision. It allows us to analyze with confidence the ability of an instrument to produce consistent data within a given range of values. In other words, it allows us to know the range of the method within which it can produce precise and reliable data. Regarding precision, it may not be useful to apply it to repeatability in case only 6 determinations at 100% test concentrations may have been done, but it can be worth to calculate an “overall” CI, considering both the values obtained during repeatability as well as the ones of intermediate precision. Further information about confidence intervals in the context of method validation and precision can be found here.