Filter validation: The bacterial retention test according to ASTM F838-20

The bacterial retention test is a parameter of filter validation that has to be evaluated accordung to the requirements of the PDA 26 report and the guidance of the FDA. The test, also known as bacterial challenge test / assay (BCT / BCA), examines if the filter is able to retain a certain number of bacteria of a defined size.

The ASTM F838-20 method is the standardized procedure used to conduct the bacteria retention test (bacterial challenge test) and determines the filter’s bacterial retention rate. The filter is mounted in a specified device and a defined bacteria solvent is pushed through the filter. The aim is to determine how many log-levels of bacteria the filter can reduce. We’ve summarized the relevant steps of the test performance for you.

You need certain materials to conduct the test. Primarily, the bacterial strain Brevundimonas diminuta (ATCC 19146) is necessary, because it’s needed to generate the bacterial suspension later. Furthermore, a testing device with a pressure connection, pressure vessel, three valves and the test filter housing must be available (see figure, simplified representation). Moreover, buffer solutions and nutrient media (like for example SLB – saline lactose broth – or TSB - tryptic soy broth) must be provided. The laboratory must also have a sterile workbench as well as an autoclave and an incubator. 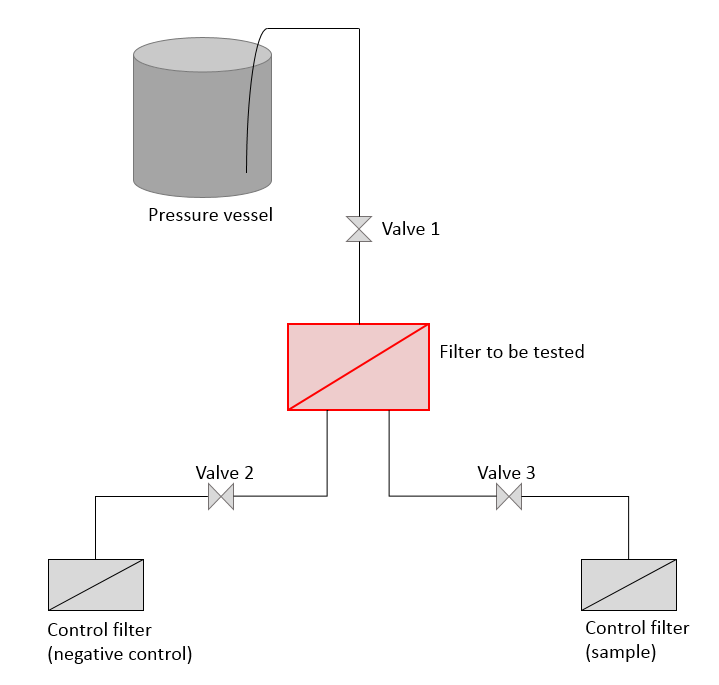 There are multiple steps necessary to generate a bacterial suspension with a suitable number of cells (depending on the type of cultivation, 107 to 108 or 1-2 x 1010 cells/mL). First, a microbial strain from the ATCC culture needs to be cultivated. These bacteria are subsequently put into a nutrient solution and later in a buffer solution and incubated for one day each at 30 ± 2°C. The suspension created this way can then be used for the test, but is usable only for a maximum of eight hours stored in the fridge. The cultivation of B. diminuta according to the requirements of the ASTM method guarantees bacteria with a diameter of 0.3 - 0.4 µm and a length of 0.6 - 1.0 µm. Bacteria of this size are considered to be very small and should be retained by a sterile filter with a pore size of 0.2 µm.

Since only living bacteria will later be growing on the control filter or medium, it’s important to determine the viable cell concentration of the utilized bacteria culture on agar plates. At first the cells are counted under the microscope. Since this includes dead bacteria as well, it’s necessary to cultivate additional bacteria cultures on agar plates. For this purpose, different dilutions (10-3 – 10-5) of bacterial suspension have to be prepared and plated as a defined quantity (0.1 mL) on the agar plates. After incubating the plates for 48 hours, the grown colonies are counted and the viable cell concentration is calculated. The concentration of viable cells should be not lower than 25 % the total cell count (dead and living).

The entire device must be prepared according to the defined requirements explained in the following paragraph to perform the test method. Since the test is conducted with B. diminuta as test bacteria, it must be ensured that the material used is free of microbial contamination. For this purpose the filter to be tested must be mounted in the filter housing of the device and then be sterilized (for example in the autoclave). Afterwards, a filter integrity test must be conducted according to the specifications of the filter manufacturer. The control filters that are later used as “collecting filters” have to be autoclaved as well. This also applies to all tubes and connecting pieces. The pressure vessel and the feeding tubing have to be treated with a suitable disinfectant (like for example 70% ethanol) and rinsed with sterile water. Afterwards, the testing device has to be assembled under the sterile workbench.

For the test performance, a negative control has to be prepared in advance. For this purpose, the pressure vessel is filled with a sufficient volume of sterile buffer or saline solution and the pressure is increased to 30 psi (= 2.07 bar). Subsequently, the filter to be tested is flooded after opening the first valve and the excess of compressed air is released. By opening another valve, the solution is transferred to the control filter and the flow volume is adjusted to 1 L/min. As soon as the entire volume has been filtrated, the control filter is mounted on a nutrient media under the sterile workbench and incubated for 7 days at 30 ± 2°C.

After that, the real test can be performed. For this purpose, the required quantity of bacterial suspension (for a concentration of 107 bacteria per cm2 of effective filtration area) is put into the pressure vessel and the test is conducted again (but with a flow rate of 2 -4 x 10-3 L/min per cm2 of effective filtration area). In contrast to the negative control, the filtrated solution is transferred to a second pipe by opening another valve and wets the control filter located there. This filter is mounted on an agar plate for cultivating possible bacteria as well and is incubated for up to 7 days.

The PDA 26 report additionally includes a positive control. During this, instead of the sterile filter to be tested, a filter with a pore size of 0.45 µm is used that should be penetrated by the bacteria because of their smaller size.

After the incubation period, the negative control, as well as the sample, has to be checked for the growth of bacterial colonies. If bacterial growth is detected on the sample, it needs to be determined which bacteria it is. This is done with Gram staining that has to be evaluated microscopically. The test bacteria B. diminuta are Gram-negative, small, rod-shaped bacteria whose colonies appear slightly yellow and glossy. Accordingly, colonies of a different color (for example light red) or Gram-positive bacteria mean that there has been a contamination by external germs. The bacteria retention rate can be calculated now, using the found number of colonies. This is done assuming accuracy of ± one log-level. If other bacterial strains are found on the nutrient medium of the sample, the test has to be declared invalid. The same applies if bacteria colonies on the negative control are found.

As usual for pharmaceutical testing procedures, it’s essential to document the test performance as well as the result accurately. That’s why the following information should be included in the test report:

Finally, it can be concluded that the standardized performance of the bacterial retention test (bacterial challenge test) according to the ASTM F838-20 method during filter validation, guarantees the receipt of reliable results independent of the (contract) laboratory conducting the test.