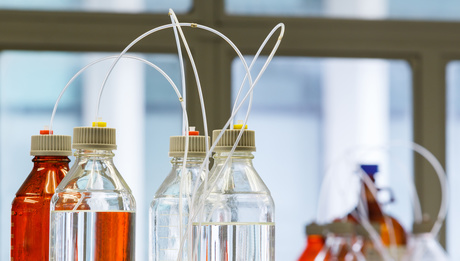 Fulvestrant or Faslodex is a drug used to cure hormone receptor-positive (HR+) metastatic breast cancer in postmenopausal women with disease progression. It belongs to the group of Selective Estrogen Receptor Downregulators (SERD) and is often considered a suitable replacement for Tamoxifen. It functions by binding to the estrogen receptor and destabilizing it, promoting degradation by the cell's normal protein degradation mechanism. For Fulvestrant’s content determination in pure and pharmaceutical dosage form or its purity, there has been no HPLC (High Performance Liquid Chromatography) or LSV (Linear Sweep Voltammetry) methods reported thus far. In this post, we would like to highlight such methods, developed by Atila et al., with focus on their advantages and compliance to method validation.

Voltammetry is an electroanalytical method that can be used to obtain information about an analyte based on current-voltage curves. Here, the electrochemical behavior and oxidation mechanism of Fulvestrant was used to determine the content of Fulvestrant applying a linear sweep voltammetric (LSV) method. For LSV, the current between two electrodes (a working and a reference electrode) is measured and the voltage is varied linearly as time goes by. A typical cyclic voltammogram was obtained at 20 mg/ml Fulverstrant in the given conditions. Anodic sweep observations showed irreversible electrode reaction since only an oxidation peak was found at 1.4 V. The linear sweep voltagramms at 20mg/ml Fulvestrant showed straight lines with a slope of 0.42, which are close to the expected theoretical value of 0.5.

To additionally analyse its purity, especially potential degradation products, a HPLC method indicating stability was used. The HPLC method was performed as a Reversed Phase HPLC (RP-HPLC) using a C18 stationary phase used for the and the best separation was observed at 243 nm.

In both proposed methods, the drug could be used directly without being extracted from its formulation excipients.

Both methods were subjected to the full spectrum of the method validation criteria recommended by the ICH Q2(R1) guideline for assay and purity tests i.e. specificity, linearity, precision and trueness, limit of detection (LOD) and limit of quantification (LOQ), as well as robustness to check for the appropriateness and stability as per FDA recommendations in their guidance for industry “Analytical Procedures and Methods Validation for Drugs and Biologics”.

It is the ability to correctly determine an analyte in the presence of other expected excipients and can be influenced by purity. To assess specificity in the LSV method, different concentrations of Fulvestrant (5.0 – 50 mg/ml) were scanned from 1.0 - 1.7 V and checked for any changes in the peak. No changes were visible. Additionally, interferences between Fulvestrant and excipients were analysed. The results were not shown in this article. HPLC runs with different Fulvestrant concentrations (0.5 - 20 mg/ml) showed clear separation and a consistent retention time of about 3.1 min. A clear dependence of the height of the main peak and the concentration is obvious, but no experiment with blank solution is presented and no explanation is given for additional peaks seen the chromatograms.

Linearity is the power of a method to elicit test results that are directly proportional to the concentration of an analyte within a specific range. Seven Fulvestrant concentrations (in the range mentioned in the specificity section above) were plotted against the respective peak area from both voltammogram and chromatogram. A correlation coefficient (r) >0.99 was obtained in every case. Both regression equations are shown, corresponding plots are missing.

Precision is the degree of agreement among individual test results and trueness is the closeness of the results to the true value. Precision in terms of interday (intermediate) and intraday (repeatability) was performed for both the methods. For both methods, six replicates of three different concentrations were analyzed. For repeatability calculations, six tests for each of the three concentrations were performed during the same day. The intermediate precision analysis included testing the same sample once daily for two days. It is not mentioned if this was done by two different operators or using different equiment. The relative standard deviation (RSD) for the 3 concentrations analyzed by the two methods was found to be ≤ 3.96 for both inter- and intraday precision. Trueness was analyzed by spiking experiments, evaluated as relative error (% Er) of recovery and demonstrated to be ≤ 2.66.

For LSV, a standard calibration curve was drawn (probably refer to the linearity experiments) and subsequently the slope (S) and the standard deviation (SD) was calculated. LOD and LOQ were estimated as being 3.3 SD/S (LOD) and 10 SD/S (LOQ), respectively. For the HPLC method, the signal to noise ratio (S/N) was evaluated and the lowest concentration where S/N was at least 10:1 was considered being LOQ. LOD was defined as S/N 3:1.

For LSV, the LOD and LOQ were 1.52 and 5.0 mg/ml whereas for HPLC they are 0.152 and 0.50 mg/ml respectively. HPLC, in this case, showed better sensitivity when compared to LSV method.

Robustness is the capacity of a method to withstand and remain unaffected by any deliberate variation to the parameters. Both methods were performed by different analysts on the same instruments and no statistically significant differences were found. These experiments are generally performed for intermediate precision and specific other experiments dealing with critical method parameters e.g. variations in mobile phase composition or pH, are usually done when checking robustness. These experiments are missing.

This parameter is used to understand the performance of the analyte in different storage conditions and is required to be analyzed for stability-indicating methods as per FDA recommendation. Fulvestrant samples were stored at +4°C, room temperature (RT) and -20°C and were analyzed using LSV and HPLC after 24 h (short term) and 72 h (long term). The analysis did not show any significant difference in the peak architecture suggesting the product can be stored under these conditions without any damage.

Other tests performed as a part of stability were susceptibility to acid, alkali and oxidation hydrolysis. For these experiments, HPLC chromatograms are shown, but no conclusion is drawn. As the legend of the corresponding figure is obviously erroneous (4 chroms are shown, only three are described), it can only be speculated about the results. Estimating (a) being unmodified normal condition all other three tested conditions are highly influencing the results by modifying the peak shape. But it should be remarked that the conditions used for these tests were quite hard, e.g. Fulvestrant in a final H2O2 concentration of 24% while for other forced degradation studies final H2O2 concentration of 0.1 to 3% are applied (see e.g. Blessy’s publication).

To summarize, the article does provide a valuable option for the validation of Fulvestrant. Among the two methods discussed here, there is hardly any difference in terms of validation parameters, both were subjected to all criteria. Regarding the experiments performed and the results presented, some optimization might be applied. On one side too much is done, e.g. in case LSV should only be used for content determination, the evaluation of LOD and LOQ would not have been necessary. Additionally, for repeatability 6 determinations at 100% test concentration or 3 concentrations with just 3 replicates would have been sufficient. On the other side, some things are missing or not shown. Specificity experiments with spiking have been done but were not presented as well as linearity plots are lacking. No evaluation of robustness or intermediate precision in terms of inter-analyst or inter-equiment has been performed. Nothing is said about the range considering precision, trueness and linearity. Individually, both methods can be used for the determination of Fulvestrant. For the use of the HPLC as a stability-indicating method some experiments showing degradation products due to e.g. storage under accelerated temperature would have been very interesting. The greatest advantage of these methods is that the operational times are extremely low. It would be also interesting to see if the LSV method can be extended to other products with strong electrochemical behaviour in a similar way.