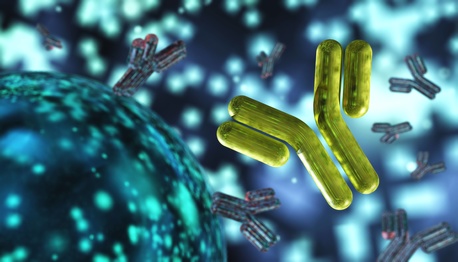 Monoclonal antibodies (mABs) are monovalent immunoglobulin molecules that bind only to the same epitope. These antibodies have a wide range of applications such as in diagnostics, analytics, and as drugs in the treatment of cancer and other autoimmune diseases. The emerging market of mAB biosimilars demands proper characterization after previously performed isolation of these molecules. Isolating these antibodies however is quite a challenge and was first done by Georges Köhler and César Milstein, for which they were awarded the Nobel prize in medicine and physiology in the year 1984.

One of the greatest challenges in the process of characterization of mABs is its susceptibility to post-translation modifications. Under stress conditions these molecules often alter their charge profile and hence their activity might be affected (e.g. due to a loss in glycosylation). One critical aspect of mAB biosimilar development is to monitor such changes in charge profile as it is directly related to safety, potency and potentially specificity of the molecule. One method to determine such charge differences is called isoelectric focussing. Antibody characterization can be performed by LC-MS (liquid chromatography coupled with mass spectroscopy) or with some commercially available kits but these methods are either expensive or require sophisticated instrumentation and are difficult to implement as QC lab routine tests to be used for drug product release testing. In this article, we will discuss a capillary isoelectric focussing (cIEF) method that is intended for identification (ID) of different charge variants of mABs based on their isoelectric point (pI; between 7.4 - 8.0), which is easy and economical to perform.

The basic principle of a cIEF method is the separation of the proteins according to their pIs in a pH gradient, which is formed by amphoteric electrolytes in a coated or uncoated silica capillary. It can be imagined as a kind of zone electrophoresis. The method was developed by Suba et al. with the aim of reaching highest resolution in a shortest possible time. It used 5 isoforms of a commercially available human IgG1 antibody as standard for optimization of two important factors:

The choice of the pharmalyte (= carrier ampholytes) is a critical point in the development of cIEF methods. To establish the optimal pharmalyte ratio, both pH 3-10 and pH 5-8 were tested separately each in 3% v/v concentration in the final solution. The results obtained either showed poor resolution or peak splicing. Finally, a mixture of pH 3-10 and pH 5-8 in the ratio 4:2 was chosen based on the migration time - isoelectric point plot results. A cut-off for the regression line of the plot was defined as coefficient of determination R2 being > 0.99, thus runs below 0.99 were not included.

For the focussing, three voltages 20 KV, 25 KV, and 30 KV have been tested and a voltage of 30 KV was selected because of the best pH gradient. In the case of mobilization, all three voltages have shown similar profiles and a pH gradient was established in each case. However, at 30 KV, the migration time observed was the shortest and hence it was selected for the final method.

For the optimal salt concentration determination, 25 mM Tris resulted in a good pH gradient, but caused peak splicing and showed poor resolution among the peaks. A similar pattern was observed in the presence of urea. Addition of 4 M urea produced a good pH gradient but caused delayed peak migration. Hence, a salt and urea free system was deemed best for the method.

Accurate pI determination depends on the quality of the pI markers. Following this concept, synthetic markers were selected based on their wide pI range, good absorbance profile, and minimum interaction with the capillary walls. For the development purpose, 3 markers with pIs of 7.0, 8.4 and 9.0 were chosen. Since the charge of the analyte was known to be distributed between 7.4 and 8.0, the selected markers would create a good pH gradient. Hence, their R2 value obtained by plotting of the migration time - isoelectric point function was used for the system suitability test (SST).

As a part of validation, the method was tested for specificity and intermediate precision. For intermediate precision, the method was analysed for precision among instrument to instrument, day to day and analyst to analyst. A total of two analysts performed the test on two different instruments for a period of three days with 6 sample preparations on each day. The results for a total of 18 samples were analysed. Of these, the mean pI value of each of the 5 peaks was calculated and the relative standard deviation (RSD) was determined. A RSD of less than 0.2 % was observed for all peaks. The highest standard deviation was 0.013, which the is lower than the minimum distance (ΔpI = 0.088) between the peaks. This is in accordance with the definition of the authors that for ID tests “the acceptance criteria for standard deviations of isoelectric points of the individual peaks should be lower than the distances between the sample peaks (ΔpI)”. Furthermore, a relative standard deviation of < 4.0 % was observed for the variability of migration times of the standard pI markers applied.

For specificity, a total of four different commercially available mABs was tested within the range of pI 7.0 - 9.0. The mABs were subjected to C-terminal lysine cleavage by carboxypeptidase B and the variants obtained were studied. Specific changes were seen.

The method’s robustness was further tested by using different fluoro-carbon coated capillary batches as well as other capillaries with polyvinyl alcohol (PVA) and polyacrylamide (PAAM) inner coatings. The capillaries were procured from different suppliers. No considerable differences in the results were observed. Similarly, tests with different batches of reagents and buffers showed no significant differences in the results obtained.

In conclusion, the suggested method is a fast and convenient method that can be routinely performed for isoelectric focussing studies of mABs. However, this method can only identify the charge variants between a narrow margin of pI 7.0 and 9.0. The selection of pharmalyte and the determination of salt and urea concentrations are the bottleneck of this method. It requires precise determination of the pharmalyte, salt and urea concentration to produce proper peak shape and resolution. According to the ICH (Q2)R1 guideline used for method validation, it is sufficient for identification methods to perform specificity tests. The additional precision parameter was not necessary as per validation requirements of this guideline. Although, it does not change the overall outcome the article, the precision results do allow a little more information about the method and were shown to be very good. Thus, the method is suitable for identification of monoclonal antibodies and their charge variants as it showed acceptable specificity and precision.