Often, the small things make the biggest difference in life. Sometimes these things we do not recognize at first as big but as soon as we draw our attention to them, they become more important.

In analytical method validation, one of these small things is the so-called sum of squares or residual sum of squares (RSS). The (residual) sum of squares you will often find as a number in validation reports that, at first sight, might be of no interest at all. That is why, in this article, we will explain in more detail what this number actually means and why it is of importance. We will discuss its meaning and its importance, as well as the pros and cons and what can be done to avoid statistical pitfalls when using the RSS.

When validating an analytical method, the ICH guideline Q2(R1) is of importance. This guideline describes which characteristics of the method need to be evaluated in order to verify that a method is suitable for its intended purpose (fit-for-purpose). How to do that is well-described in detail in “Validation of Analytical Procedures: Text and Methodology Q2(R1)“, where ICH stands for International Council for Harmonisation of Technical Requirements for Pharmaceuticals for Human Use. For assays or quantitative impurities, not only characteristics as specificity and range, or trueness and precision have to be evaluated, but also, the linearity of the method needs to be assessed. Linearity in this context is defined as the ability (within a given range) to obtain test results which are directly proportional to the concentration (amount) of analyte. The basis for evaluating linearity is the linear relation between the analyte concentration and the signal. It is easy to visualize the data and the linear relationship, as displayed in Figure 1. 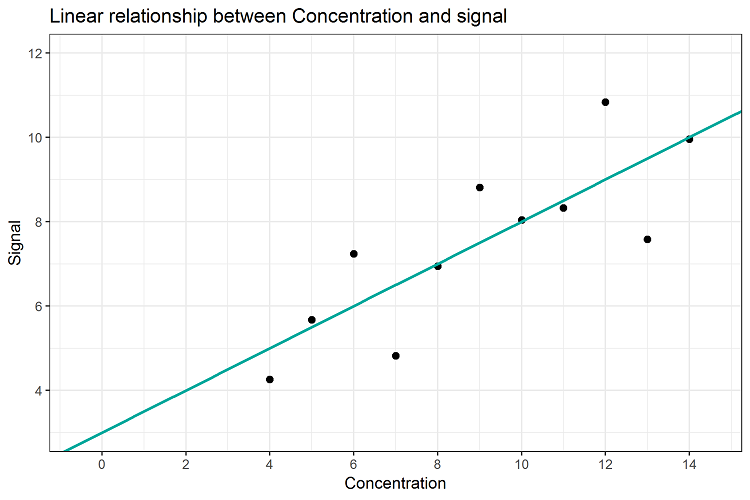 Will one graph be enough to match ICH Q2(R1) requirements?

Let’s assume we already have calculated the regression line describing the linear relationship between concentration and signal, hence we also know its slope and y-intercept. Using Excel or other tools for calculating the regression line we also know the coefficient of determination. Are these measures enough to define our method as being fit-for-purpose regarding linearity? Let’s have a look into the guideline:

Most of the characteristics were already calculated. A graphical representation of the data and the regression line (including the formula showing slope and y-intercept) can be set up easily in Excel, the R2 value can be included in the figure with a single click in Excel as well. Rooting R2 results in r, which is the correlation coefficient, also required by the ICH Q2(R1). According to ICH Q2(R1), we already have almost everything we need to address for evaluating linearity. The only thing left is hidden in the last sentence. So, the last thing we need to clarify is the residual sum of squares.

From single values to residual sum of squares 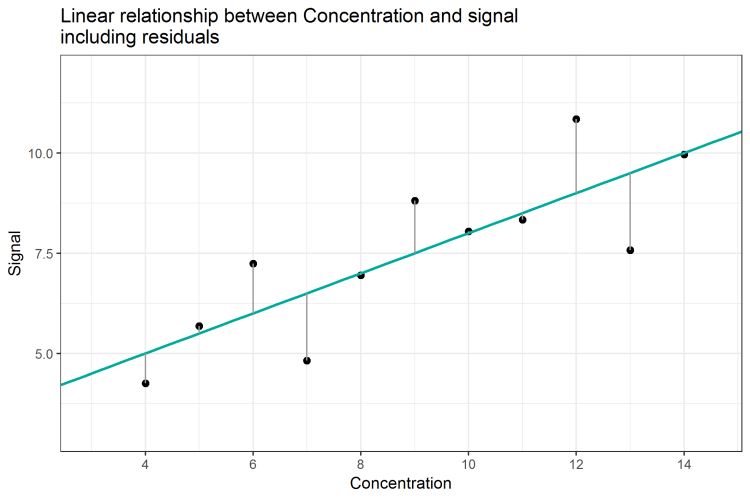 Figure 2: Linear Relationship between analyte concentration and signal, including residuals

As calculated in Table 1, the sum of all errors (the sum of residuals) is resulting in 0. This is because errors can positive or negative, as well – the model underestimates and overestimates. By summing up the errors, all errors compensate each other. This is a fundamental characteristic of the regression line and the method of least squares. Therefore, the sum of residuals can’t be used as an indicator of how well the regression line fits the data.

Since the sum of residuals is not an adequate measure to evaluate the validity of the regression model, we need to find another way to still use the residuals. To get rid of all negative values, we square the residuals (Table 2). This simple transformation has two advantages: First, the square of a number is always positive and as a consequence, each squared error cannot be negative anymore. Additionally, for small errors, e.g. errors less than 1 unit, the square of it will be even smaller and closer to 0 (e.g. 0.52 = 0.25). And for residuals bigger than 1, the squared residuals will be even bigger (e.g. 2.52 = 6.25). That means that small deviations from the regression line will be “rewarded”, while bigger deviations will be “penalized”.

Now we know what the residual sum of squares is, but we still have not discussed the actual meaning of this measure. We know that smaller RSS might indicate a “better” model, or a “good” relationship between signal and concentration. But then, does this indicate that the method is fit-for-purpose? What is the threshold for the RSS? Or is there a threshold at all? In the ICH Q2(R1) guideline, there is no reference or comment regarding this aspect. It says that we need to state this number, but no interpretation of this number is needed. This is strange because the RSS is an indicator of model quality.

Since there is no RSS limit based on which we could declare the method as being fit-for-purpose, can we set a limit by ourselves? And if we are aiming for small RSS, could we just transform the data to decrease the RSS and make it look better? We could try by changing the units of the signal (Table 3). Let’s assume we would have a RSS value of 13.75, and the signal is given in Litres. What would happen if we use the exact same data, but transforming them to Gallons (1 Gallon = 4.54609 L)? What would happen to the regression line characteristics, and especially to the residual sum of squares?

Table 3: Differences in slope, y-intercept, RSS and R-squares, depending on signal units

The change of signal units would result in a change of regression characteristics, especially the slope, y-intercept and also in the residual sum of squares. Only, the R2 value stays the same, which makes sense because there is still the same relationship between concentration and signal, it is independent of units. Astonishingly, the transformation results in a RSS of 0.666, a reduction of about 95% (!). That would sound much better in the validation report, wouldn’t it? ... having a RSS of less than 1 instead of more than 13.75...

And still, you cannot fool statistics because you can always back-transform the data using the factor of 4.54609, which will reveal the original values. Therefore, it doesn’t make sense to define any upper limit for the RSS because this characteristic depends on the method itself. It depends on the number of data points, e.g. on the number of replicates and concentrations, but also on the chosen values of concentrations. Thus, the RSS must always be considered together with the method itself, the R2 and the characteristics of the regression line. Providing RSS without the other aspects is without any value. Therefore, it makes sense that the ICH Q2(R1) is requiring the RSS without any limit for the model. There cannot be a single limit for the RSS. As the RSS should always be regarded with all other data of the regression model, the following sentence of the guideline is absolutely warrantable:

“The … residual sum of squares should be submitted. A plot of the data should be included. In addition, an analysis of the deviation of the actual data points from the regression line may also be helpful for evaluating linearity.”

This sentence is of importance, even if the word may does not suggest that. Although the RSS gives us no hint whether the method satisfies any RSS condition, it could still happen that most of the data points contribute little to the overall RSS but one data point is far away from the regression line, such that its residual has a very big contribution to the overall RSS. Since the RSS equals the squared deviations from the regression line for all data points, we still do not know if there are some data points influencing the RSS more than others are doing. Therefore, it is suggested to further analyze the deviations and not only rely on the RSS itself.

From residual sum of squares back to single values

One idea to investigate the contribution of each data point is to measure its contribution by dividing its squared residual by the RSS. By doing so, we get a percentage of contribution and recognize that only 3 out of 14 data points (in bold) contribute about 70% to the total RSS. The data is summarized in Table 4:

Table 4: Contributions to the RSS by each data point 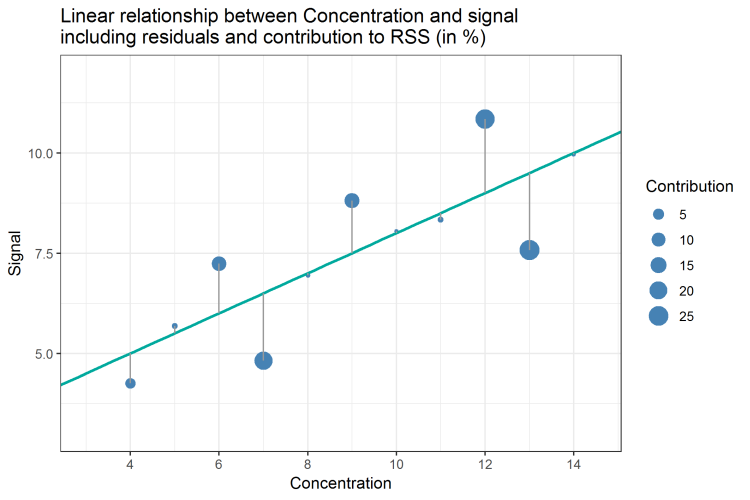 Figure 3: Linear Relationship between concentration and signal; size of data point corresponds to its contribution to RSS

In the upcoming second part of this article, you'll learn how to examine the influence of each single data point, what Hat values and Cook's Distance are, and how to use Excel for such calculations.