In the first part of this blog article we became familiar with the RSS and started to get an insight about the influence of the individual data values. This is followed by this part.

Hat Values and Cook’s Distance – what is really influencing the regression line?

Figure 1: Change of the regression line by removing single data points when calculating

Depending of the number of data points n, there is a limit for which a data point will likely be a high-leverage data point. In our example, this limit will be 2 * (2/n) = 0.363, where n = 11. A synonym for leverage is Hat Value or H Value. A visual representation is given in the following Figure 2, indicating that in our example, there are no high-leverage points. The data points for the concentrations 4, 5, 13 and 14 are possessing high leverage values as they are “far away” from the other data points. But as their leverage values are below the calculated limit of 0.363, they aren’t high-leverage points. Figure 2: Leverage of each data point, and relation to hat value limit of 0.363

It is also important to clarify that data points with higher leverage don’t imply that they have a big influence on the regression line because they are only dependent on the X-coordinate (or analyte concentration in this case). Y values (or signal values in our case) are of no importance for the calculation of the leverage. Thus it is possible that data points with low leverage values do possess a high influence on the regression line and hence the quality of the method. Therefore, to fully investigate the influence of a data point, we need to have an additional measure that also takes the Y values into account.

A measure that takes the X and Y coordinate for each data point into account is the so-called Cook’s Distance (D) [1]. It relates each data point to all other data points, depending on the X and Y coordinates and is therefore giving a better measure for identifying so-called influential observations. These D values should be as small as possible and less than a limit which, for D, is calculated as 4/(n-2), with n representing the number of data points. In Figure 3, all data points are represented as Cook’s Distance and the limit here is 4 / 9 = 0.445. Consequently, data point x = 13 is identified as an influential observation, meaning, it would change the slope and / or y-intercept too much when removed. But, when looking only at its leverage this data point would not be identified as unusual. The values of Cook’s Distance are a mixture of the RSS and the leverage values. They combine the characteristics of all single data points by investigating the Y and X coordinates in relation to all other data points. Only with this combined measure the actual influence of a single data point can be revealed. To include this knowledge into the standard scatter plot and regression line, one might color-code data points having a statistical influence onto the whole data set. A figure containing all information might look like Figure 4. Here, the data, the regression line, and the information about the influence of each data point, is shown. The threshold is 0.445 and it can be seen that data point 13 is indicated an influential data point (blue color). Also, it should to be remembered, that this information couldn’t be made visible by only focusing on the residual sum of squares. Even for a “low” RSS value, there still might be influential data points present in the data set. 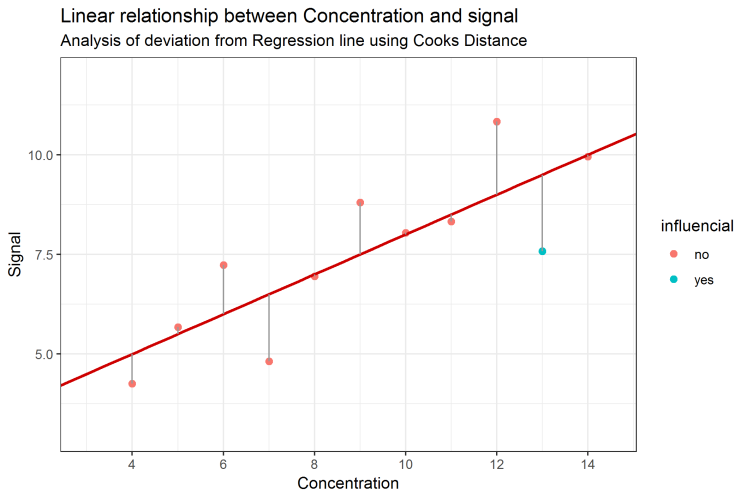 So, what to do when investigating linearity?

The ICH Q2(R1) requirement of „analysis of the deviation of the actual data points from the regression line” can easily be assessed using programs like Excel or other software solutions. When it comes to presenting the residual sum of squares, one needs to be sure what the RSS means. Good scientific interpretation can only be possible when investigating each data point because each data point has its unique contribution to the overall RSS. Visual inspection of the data is required, but cannot provide scientific justification, therefore one should always perform further “residual” analysis – not only to satisfy ICH Q2(R1) requirements, but also to gain knowledge about its own data.

The residual sum of squares is a statistic value which is applied e.g. in linear regression. Its importance is often neglected, but when falsely interpreted it can lead to misunderstandings. In the same way that the average summarizes the properties of many data points in one value, the information about the individual values is lost. Regarding RSS, the individual contributions of the error squares are lost. Therefore, they must be separately analyzed to interpret the RSS correctly. Statistical key figures such as hat values / leverage or Cook’s Distance are useful to classify the contributions of the individual values correctly and thus help in the proper interpretation of the residual sum of squares.

In analytical method validation, the RSS must be specified in addition to general key performance indicators. In the guideline, there is no information about an upper limit for the RSS, and the performance of the residual analysis doesn’t seem to be mandatory as the word “may” is used. In obvious cases, a visual analysis of the residuals may be sufficient, but it is unable to identify potential influential data points. However, it is precisely these influential observations that may jeopardize the fitness-for-purpose of the method’s linearity, as they might distort the established linear relationship between analyte concentration and signal. Visual analyzes are always subjective - "scientific justification", on the other hand, can only be obtained by objective criteria, such as Cook’s Distance or similar methods for residual analysis.

It is possible to calculate the discussed measures in Excel 2016: The example discussed above is taken from a publication of Francis Anscombe [2]. The publication contains four data sets, the well-known Anscombe Quartet. These data sets are identical in many linear regression characteristics, although consisting of completely different data points. Here, we work with the first of these data sets (Table 1).

When transferring these data into Excel, we here assume that the X values (e.g. analyte concentration) and the Y values (signal) will be stored in columns A and B. For analysis, first, we click onto “Data” and “Data Analysis”. There will be a new window from which we select “Regression”. Then, we enter the X and Y values cell ranges from the Excel sheet, e.g. columns A and B. It is important to activate the Residuals button, then we confirm by clicking “OK”. A new sheet is opening, where we will find all the information that we need for further analysis. These are stored in the following cells (Table 2):

Since we will need the raw data and the values for the residuals for future calculations, we will merge them into one sheet. I merged the raw data into the new sheet, resulting in having the data point number in column A, the Y estimates in column B, the residuals in column C, and then analyte concentration and signal in columns D and E, they are shown from row 25 to 35 (Figure 5): To calculate the values for Cook’s Distance D for all data points i, Di, we need the formula: Di = (isri2) / p * hi /(1-hi). In order to do so, we need to calculate two more things, namely the leverage hi and squares of the isr values. These can be calculated from the residuals, which we already have.

Calculation of Residual Sum of Squares

The residuals for each data point can be calculated in the sheet be subtracting the Y estimates from the signal values, or E25 - B25 (for the first data point). The RSS then is the sum of all the squared residuals (E25 – B25)^2. Here, I put the residuals into column F (cells F25:F35) and the squared residuals into column G (cells G25:G35), see Figure 6. The value of the sum, or RSS, I will save in cell F37, its value will be the same as in cell B14, which is part of the data analysis output.

Calculation of leverage or H values

For further calculations, we need the average values (the mean; x), as well as the standard deviation (sx) of all x values (concentration). The average of x we will get using AVERAGE(D25:D35), and we save it in cell D37. The standard deviation of x we will get using STDEV.S(D25:D35) and we save it in cell D38. We will need those for the following steps, the calculation of leverage respectively hat values: The formula for hat value calculation is hi = 1/n + 1/(n-1) * ((xi - x)/sx)2. Using the currently calculated values for x and sx, we use the following Excel formula to calculate the hat value for the first data point (D25): (1/$B$8) + 1/($B$8-1) * (($D25 - $D$37) / $D$38)^2. Again, as stated above, we recognize that leverage is just depending on the x values (concentration, column D) of the data and on its relation to the other values (indicated with cells D37 and D38), but not on the y values (signal).

The following Figure 7 shows a summary of all the steps taken:

Figure 7: Overview over all steps needed to calculate leverage and Cook’s Distance for a given data set based on linear regression in Excel 2016.

Did you like this article? Then, you've got the possibility to download the whole article as pdf by clicking here.