High Pressure Liquid Chromatography (HPLC) is a technique widely used to separate various substances in solution. A HPLC system could be thought as an example of a steady flow:

Back in the mixing chamber (B), the ratio of the mobile phase solvents can now be changed in a way so that the sample components bound to the column are washed away gradually. In general, this is achieved by creating a linear gradient between two components. In our example with RP as stationary phase, changing the ratio of solvents from polar (e.g., water, light blue) to nonpolar (e.g., acetonitrile, light red) is sufficient. The more non-polar the mobile phase mixture becomes, the sooner the non-polar sample components are detached from the column particles: with the weakly bound components eluting first.

The continuous stream of solvent then passes through the detector (E), which detects the various dissolved sample analytes. Depending on the application, there are a variety of available detectors. The simplest would be a UV/Vis detector, which measures the absorbance of the sample constituents at a specified wavelength. The measurement is recorded using a computer program (F) and a chromatogram is obtained in which ideally, every individual sample component produces an absorbance peak. The chromatogram provides the retention time, this is the time from injection to detection, of the respective peak. In our example, polar constituents (blue) have a significantly lower retention time than their nonpolar (red) counterparts. Knowing the sample components, it is possible to identify the peaks by comparing the retention times and absorbance spectra with known standard substances. Identification of unknown substances with this method, however, is far more complex. For that, one needs additional downstream analytical methods to study, for example, the mass (mass spectrometer) or structure (nuclear magnetic resonance, NMR). For this purpose, individual HPLC fractions can be collected using a fraction collector and subsequently analyzed further. Recent technological advancements have allowed direct coupling of the mass spectrometer to the HPLC system (LC-MS coupling, like in this example), allowing the chromatographically separated sample substances to be directly investigated regarding their masses. This method of detection has gained extreme popularity because the individual capabilities of each technique are enhanced synergistically. The final step of the HPLC, as in all other methods, includes the disposal of the mobile phase eluates into a designated waste container.

Futher HPLC blog articles on topics such as HPLC pressure differences, too broad peaks, peak symmetry in general, increasing sensitivity and method optimization can be found here by clicking on the respective term. 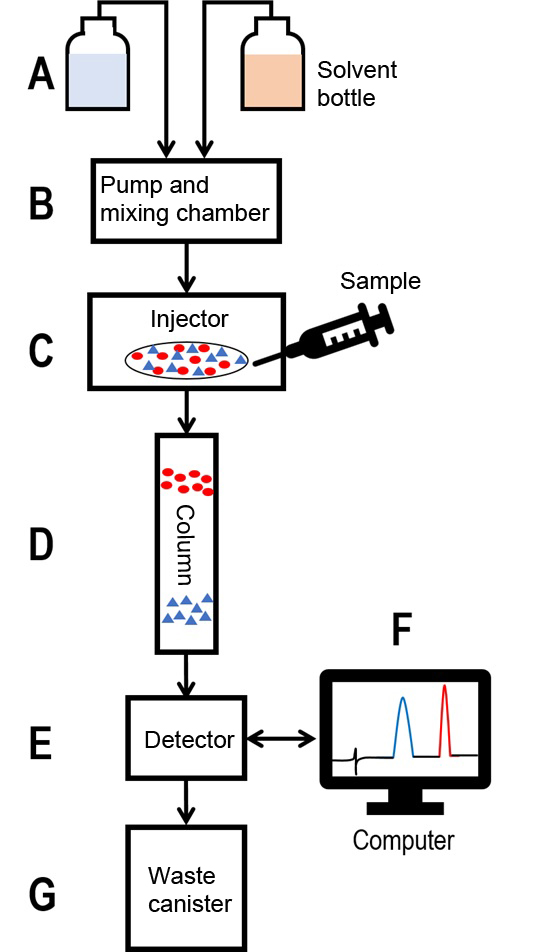