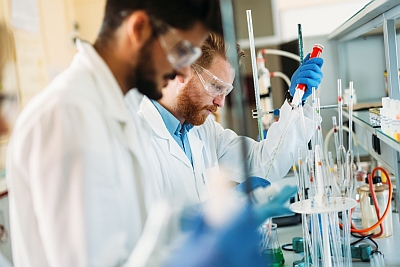 As can be seen from the different names and by the definition of the ICH Q2(R1) method validation guideline1, intermediate precision is a parameter that evaluates the variability in the results generated by different influences within one lab which will occur in the future routine analysis, such as performing the analysis by different analysts, on different days, using different instruments, lots of reagents or columns… It should be highlighted that apart from these variations, replicate measurements using the same measurement procedure and the same sample within the same lab are made for intermediate precision. This is similar to repeatability which is evaluated under the same operating conditions over a short interval of time; whereas intermediate precision is evaluated over an extended period of time considered the variations mentioned above.

Data evaluation should be illustrated by the following examples. Image two analysts are performing a content determination of a drug substance, they are both doing 6 measurements at the same day while using the same instrument and are getting these results:

To underline the importance to use the relative standard deviation for the evaluation of intermediate precision, check the next example. Image the same scenario as before, but analyst 2 is performing his analysis on a different instrument:

It can be seen that analyst 2 is as precise as before (when you are just looking at his SD and RSD), but that there is obviously a strong influence of the second instrument (seen by the higher RSD which connects scatter and mean value).

For evaluating the data, you might also think about comparing two data sets (e.g. made by two analysts, comprising e.g. 6 measurements each, as in the example above) by statistical tests to show that they don’t differ significantly. I recommend avoiding such an approach, as it might occur in case of little scatter within each series and the small sample (e.g. n = 12) that the test results in a significant difference which leads to a problem in argumentation.

Also, according to the ICH Q2(R1) guideline, it not necessary (but still usual practice) to study each variation individually, instead using a so-called matrix approach is encouraged.

Considering the ongoing efforts of not performing method validation as “ticking check lists” just following generic approaches, but rather respecting QbD principles such as a risk-based evaluation of the important method influencing factors, it will be interesting on how this will be implemented by the new ICH Q14 guideline.