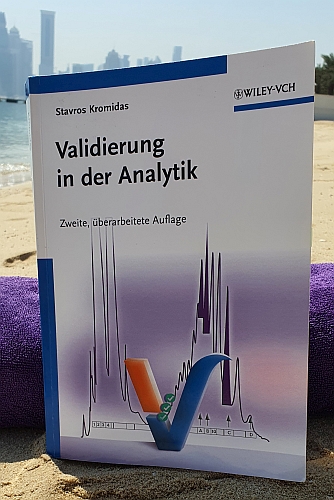 It seems I somehow might say: “No vacation without any technical book!”... Therefore, today's review is about the book “Validation in analytics” by Stavros Kromidas (2nd edition published by the Wiley-VCH Verlag GmbH & Co. KGaA Weinheim in 2011, ISBN: 978-3-527-32939-7).

the title is program. On 341 pages, all aspects of the validation of analytical methods are comprehensively explained and additional related topics are addressed. After an introduction to the topic, including practical prerequisites before starting a method validation, a super crisp summary of the individual validation parameters follows, before these are explained in detail in individual chapters.

In addition to precision, trueness, robustness, selectivity and specificity, linearity, recovery, limit of detection, limit of quantification and limit of decision, the chapter on the working range also deals with process and method capability. Further chapters are devoted to frequently asked questions about method validation and current trends (keyword measurement uncertainty). This terminates the “real” part of the book at page 255.

Hm, the attentive reader will surely ask what fills the remaining 86 pages. To say it briefly, “useful additional knowledge” as appendices. This includes an exemplary method validation SOP, an extensive collection of explanations of terms (however, also of terms that did not appear in the book), the most important terms in English, a subject index as well as one of the calculation examples contained in the book, the statistical tables to the explained statistical tests and a bibliography.

I was first from the point of view. This book is aimed at all testing / contract laboratories and is therefore based on ISO 17025. This is not at all bad, even if I had to take off my pharmaceutical glasses and was unfortunately overwhelmed by pages of standard text in the first chapter. That didn't make it easy to get started. After that, however, it was consistently understandable for a reader with background knowledge, but written in a sophisticated way. And you should read the book in one go from front to back, since opening of a later chapter is rather difficult to understand without the knowledge of the previous chapters. E.g. the explanations of the designations are missing for formulas previously mentioned (since they were already introduced before). Therefore, I unfortunately have to say that the individual chapters are not understandable on their own and I have often written in the margin a reference to the page / chapter of the initial introduction of a formula.

I particularly liked the strong practical relevance and the statistical explanations based on super-comprehensible calculation examples. The selection of topics is perfect, everything important is covered and even goes beyond. My own expectations of this book were fully met. For me personally, the section on process and method capability was particularly interesting because it was completely new territory for me. Didactically, the book is also appealing; it is well illustrated and provided with tables, and has additional supplementary boxes that sometimes contain a commentary, a conclusion, or an explanation. Ultimately, however, it profits by its great illustrative examples.

Unfortunately, I have to chalk a bit for the many more or less serious errors, which concern among other things spelling, terms, calculations and cross-references to other chapters (forgotten revision from the first edition?). Also, abbreviations that were not introduced were used (and the explanation appeared on the next page) or different abbreviations for the same term. I also find it a bit unfortunate referencing sources that are not publicly available, such as company writings, lectures, or seminar materials. In some places the book was already outdated during publication of second edition, sometimes a table tears the context apart and from time to time, there were identical repetitions. Explanations of two different terms in the appendix using exactly the same words seemed a bit like being a stopgap, which the book doesn't need at all.

Despite this gripe, this book has provided me with an incredible amount of background knowledge or refreshment and often allowed me to think outside the box. While reading, I literally "worked" with this book through many additions, corrections and references that I have entered, and it will continue to serve me as a reference book.

in my opinion is this book for everyone who is interested in the field of method validation and who has a certain open-mindedness towards mathematical formulas and statistical tests ;-)